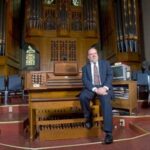 Brian Taylor is Professor of Sacred Music. He holds the Bachelor of Music degree from Westminster Choir College, the Master of Divinity degree from Austin Presbyterian Theological Seminary, the Master of Music and Master of Sacred Music degrees from Southern Methodist University and the Doctor of Sacred Music degree from the Graduate Theological Foundation. He is certified at the Associate level by the American Guild of Organists. His organ teachers have included Vernon E. Smitley, Miriam Bellville, George Markey, Eugene Roan and Robert T. Anderson. Dr. Taylor serves as Organist-Choirmaster of St. George’s Episcopal Church in Schenectady, New York. Previously he served churches in South Carolina, Georgia, Tennessee, Texas, Alabama, New Jersey, Virginia and Michigan. He has concertized in the United States, Canada and once in Brazil. He has also taken choirs to do British Cathedral residencies on several occasions. Dr. Taylor has composed two anthems published by Sonare Publications as well as several articles.