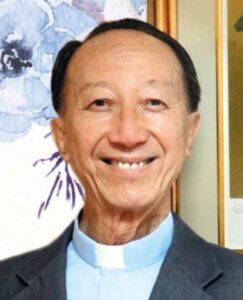 Francis Leong, MM, is a Fellow of the Graduate Theological Foundation, Bishop James Anthony Walsh Professor of Asian Christian Studies and Musicology, and Director of Southeast Asia Programs. He was born in Penang, Malaysia. He was educated by the La Salle Christian Brothers and obtained his Teacher’s Certificate at St. Joseph’s Teachers College in 1958. He has taught for 17 years in the field of education serving as Senior Science Supervisor, Music Director and Principal of a music center in Singapore. He spent five years at London University studying music and education. He is an Associate of the Royal College of Music, London (A.R.C.M.); an Associate and Licentiate of Trinity College of Music (A.T.C.L., L.T.C.L.); and a Licentiate of the Royal Schools of Music (L.R.S.M.). He also studied Musicology for three years at the University of California at Santa Barbara (UCSB). He holds a B.Mus. (Lond.) and M.Div. (Maryknoll School of Theology). Ordained to the missionary priesthood at Maryknoll, Dr. Leong has served as chaplain at Lourdes Hospital in Binghamton and Calvary Hospital in the Bronx, New York. He served as Associate Pastor at the Church of Our Lady of Perpetual Succour in Singapore where he also ministered to the sick and the Vietnamese boat refugees at their camp in Sembawang.  Assigned to Hawaii in 1989, Dr. Leong served as Director of Religious Education and Director of Music and Liturgy. During 1995-1998 he was the Parochial Vicar at St. Augustine’s parish in Ossining, New York, and later did part-time work as Assistant Librarian at Maryknoll. From 2000-2004, Dr. Leong was appointed Vice Principal and Head of the English Department at the Guangzhou Institute of Fine Arts in Southern China where he also served as Music Consultant and Executive Advisor to the President. Dr. Leong holds the Doctor of Ministry, the Doctor of Philosophy, the Doctor of Sacred Music and the Doctor of Divinity degrees from the GTF and has studied at Oxford University in conjunction with his studies at the GTF.