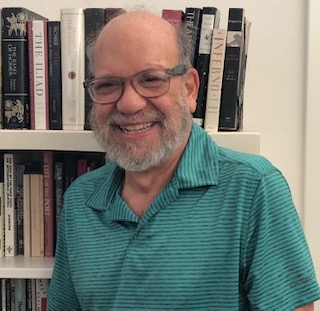 Herb Levine is Professor of Jewish Spirituality specializing in Spirituality of the Psalms and Twelve Step Spirituality. Dr. Levine is author of Sing Unto God a New Song: A Contemporary Reading of the Psalms (Bloomington: Indiana University Press, 1995) has taught courses in Leviticus, Psalms and the Bible as Literature at Franklin and Marshall College, The Reconstructionist Rabbinical College and the National Havurah Summer Institutes. He was educated at Harvard College (A.B. Magna cum Laude in American History and Literature), The Boston Hebrew Teachers College, The Reconstructionist Rabbinical College and at Princeton University, where he earned his Ph.D. in English and American Literature. He is student and practitioner of Mussar, the tradition of Jewish ethical self-reflection, trained through the Mussar Leadership Institute of Philadelphia. He has been a person in recovery since 1996. Dr. Levine is also a translator, with Rabbi Reena Spicehandler, of stories by Israeli Nobel prize winner, Shmuel Yosef Agnon, which will be appearing in 2016 from the Toby Press.

Books
Religious Affiliation
Online Course Offering
If there is an Online Course that you would like to take which is not listed, please click here to fill out our Online Course suggestion form for our faculty members.
Faculty Contact