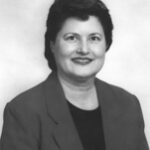 Martha Sobaje is a Fellow and Professor of Sacred Music and is Minister of Music and Education at Phillips Memorial Baptist Church in Cranston, Rhode Island, and Adjunct Instructor of Music at Community College of Rhode Island. She previously held faculty positions at the University of Northern Colorado, Barrington College, and Gordon College. She holds a Bachelor of Music degree from the University of the Pacific in Stockton, California, a Master of Music degree from the Eastman School of Music in Rochester, New York, and a Doctor of Sacred Music from the Graduate Theological Foundation. Dr. Sobaje attended the Oxford Theology Summer School at Christ Church College of Oxford University in 2001. She is a member of the American Society of Composers, Authors and Publishers (ASCAP), and her choral, handbell, and organ compositions are published through many companies, including Kendor Music, Almitra Music, Elkan-Vogel, Music 70, and Studio PR, among others. In addition to workshops and conferences around the country, Dr. Sobaje has performed organ recitals at the University Church of St. Mary the Virgin, Oxford University, England, as well as in various American churches. Her organ compositions can be heard on two CDs, From Pen to Pipes and Pipes Rhode Island. Dr. Sobaje recently completed a two-year term as Dean of the Rhode Island Chapter – American Guild of Organists.

Books
Religious Affiliation
General Areas of Interests
Specialized Areas
Areas of Service
Online Course Offering
If there is an Online Course that you would like to take which is not listed, please click here to fill out our Online Course suggestion form for our faculty members.
Faculty Contact