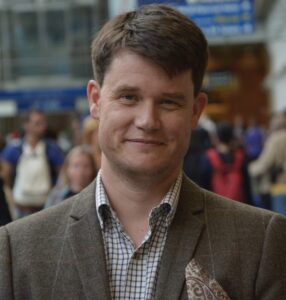 “Sean Oliver-Dee is the John Locke Professor of Religion in Public Life and Director of the Augustinian Centre for Religion and the Public Square. He received his masters in theology from Brunel University in the UK and his Doctorate, which fused the disciplines of theology, politics and history, from the University of Middlesex (UK). Since completing his doctorate, Sean has written, researched and lectured on religion and public policy for more than a decade. He has done project work for a number of government departments and Parliament in the UK as well as for the European Union. Sean has a research post and tutors in the Faculty of Theology and Religion at the University  of Oxford. He has authored a number of books, including, most recently, Courting Islam: US-British Engagement with Islam since the Colonial Period (2020) which examined how the British and American governments historically engaged with Muslim countries and Muslim minorities in areas of foreign and domestic policy, as well as Muslim Minorities and Citizenship: Authority, Communities and Islamic Law (2012): an historical analysis of the policy implications of Muslim identity, belonging and citizenship in Britain and France from the Colonial period to the present and The Caliphate Question: British Government and Islamic Governance (2009), which was the published version of his doctoral thesis.”